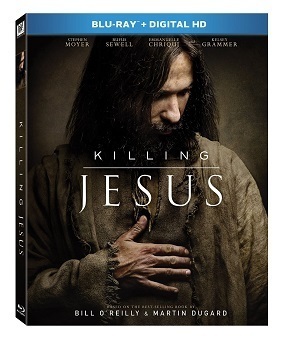 Based on the New York Times best seller by Bill O’Reilly and Martin Dugard, Killing Jesus is an epic motion picture event chronicling the life and death of Jesus as never before. Featuring an all-star cast, including Stephen Moyer, Rufus Sewell, Emmanuelle Chriqui and Kelsey Grammer, this thought-provoking account adds new context to the story of Jesus and the conflicts that led to his demise.

**Feature Presentation Blu-ray
**Actor Revelations: The Cast Members Describe Their Characters
**Costume Design and Makeup
**Production and Location Featurettes
**Director’s Vision
**The Power Struggle of the Time
**Behind the Scenes: Killing Jesus
**Digital HD
CAST & CREW
Haaz Sleiman…Jesus
Stephen Moyer…Pontius Pilate
Kelsey Grammer…King Herod
Aneurin Barnard…James
Emmanuelle Chriqui…Herodia
John Rhys-Davies…Annas
Vernon Dobtcheff…Isaiah
My thoughts: This is an interesting insight to the life and death of Jesus, but it is definitely not relevant to my own beliefs of how Jesus lived and the way things unfolded back then.
ABOUT TWENTIETH CENTURY FOX HOME ENTERTAINMENT
Twentieth Century Fox Home Entertainment is the industry leading worldwide marketing, sales and distribution company for all Fox produced, acquired and third party partner film and television programing. Each year TCFHE expands its award-winning global product portfolio with the introduction of new entertainment content through established and emerging formats including DVD, Blu-ray™ and Digital HD™. Twentieth Century Fox Home Entertainment is a subsidiary of 21st Century Fox.

Disclaimer: I received a copy of this film to review and to keep. All opinions are my own.