Join Lola on her journey as she makes her way through a fun filled environment of bright colors, interactive characters and creative problem solving to get all of her friends to a party!
Specifically designed for children 3–7 years old, Lola’s Math Train encourages children to learn key skills like adding, subtracting and puzzle solving all while having fun!
As of March 21st 2013, Lola's Math Train is also available for Nintendo 3DS, on the Americanmarket. A European version will follow.
Key Features:
– A variety of mathematics games with Lola Panda
– Three levels to choose from
– Difficulty level adjusts automatically, to suit the child's skills
– Easy-to-use game design
– High-quality graphics and fun interactive animations
Lola's Math Train is available as FREE trial versions for iPad, iPhone, Mac, and Android. The free versions contain the easiest level of the game.
My Experience: My six-year-old son, Braxton has a Nintendo 3DS, and he has been playing Lola’s Math Train every chance he gets for the past three days. It is fascinating to see him getting so into it. Braxton is learning number identification, addition and subtraction, as well as sequencing numbers in a row, equations, patterns and shape recognition. 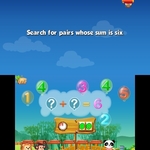 The players are put in the conductor's seat of a train headed to a big bash, and all of Lola's animal friends are invited. During each leg on the six-step journey, 11 math problems must be solved before arriving at a station where a single animal can be loaded into one of the available carts. 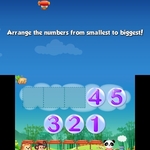 After every three math problems, there's a fun activity, such as a puzzles to solve or little games such as arranging separated pieces that make up a whole number, sets of shapes where one or more instances in the pattern are missing and must be filled in, and one where numbered balloons must be dragged over to create an acceptable equation.

I am actually amazed at how much my little boy is learning from playing Lola's Math Train. (He's actually smarter than I thought at math.) I wish I would have had a game like this for when I was a little kid. I was always so bad at math, and I still am!)
All in all, I am very pleased with Lola’s Math Train. My son loves it. As a mother, I love watching him play it, and to see how much he is learning from it.

Disclaimer: I received a copy of this game to review and to keep. The opinions are my own.