Dandy Blend  is a 100% caffeine-free, gluten free, bitterness and acid free beverage that tastes remarkably like a rich, full-bodied cup of coffee.  It is one of those products that sells itself as soon as a person tries it.

Dandy Blend is the only herbal coffee substitute in the US that features both the health benefits of dandelion root and the rich, full-bodied flavor, smoothness and texture of real coffee. Many say that, because it lacks bitterness and acidity, it actually tastes better than coffee. It is made of water-soluble extracts of roasted roots of dandelion, chicory and beets, and the grains of barley and rye. Nothing else is added. It is naturally sweet and usually requires no added sweeteners.
Dandelion root is what makes Dandy Blend unique and so much better that it stands out from all other options available. It is the only instant coffee alternative in the United States that contains dandelion root. To Americans, dandelion may be considered a weed, but to people all over the world it is a valued vegetable and highly respected herbal medicine. It is one of the top six herbs in the Chinese medicine chest. 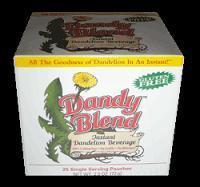 Dandy Blend contains over 50 trace minerals in each cup, most of which the body uses to help synthesize compounds needed in metabolism.
There are no headaches or other withdrawal symptoms when switching from coffee to Dandy Blend. It is like switching from one brand of coffee to another. Most people generally can't tell that they aren't drinking coffee. 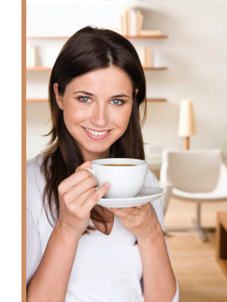 On top of all this, Dandy Blend costs as little as 7 cents a cup – less, on a per cup basis, than coffee, or instant coffee alternatives that do not contain dandelion.
My Experience:  I received samples of Dandy Blend to review. I have never been a coffee drinker, but when I was a child, my dad used to make Postum on chilly mornings, which was an aromatic hot, coffee like beverage that brings back warm fuzzy memories for me. He would add evaporated milk or cream and I would drink it with him. When I heard about Dandy Blend, I immediately wanted to give it a try, especially when I heard that it is full of trace minerals and has health benefits. There is nothing more comforting to me than to sip on a cup of something warm in the mornings because it reminds me of my childhood. Since I had never tried Dandy Blend before, the first time I made it with water that was hot, (not boiling because it can give the Dandy Blend a bitter/burnt taste.) I mixed it up and added some almond milk. I was pleased at how it dissolved quickly when I stirred it. Then, it was love at first sip! This is a taste that I can really get used to. It does taste a bit like the Postum my dad used to drink. Ah, the sweet memories. My daughter, Kendallyn came in one morning when I had just made myself a hot cup and she said, "Mom, what is that? It smells awesome." She took a sip and now she is hooked. She is really into health foods and when I told her about the health benefits of Dandy Blend, she was even more intrigued. We have tried it with cold milk and that is very good, too! 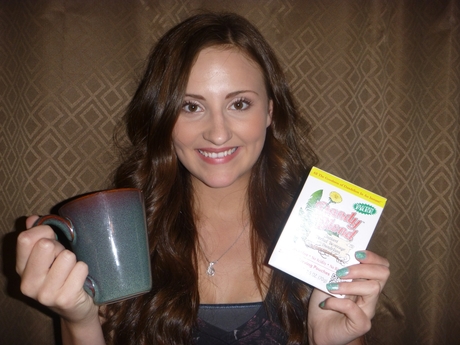 Even my daughter, Kendallyn approves of Dandy Blend!
To learn more about Dandy Blend or to place an order go to: https://www.dandyblend.com

Disclaimer: I received a sample of this product to review and to keep. The opinions are my own.