Famed celebrity makeup artist, Sir John, & Luminess Cosmetics are proud to present a Limited-Edition Collection inspired by Disney’s “The Lion King.” Having fallen in love with the incredible imagination and storytelling of Disney’s original “The Lion King” in his youth, Sir John’s connection with the film and the world it takes place in was further heightened when his work took him throughout Africa.

In partnering with Luminess Cosmetics, known for their high quality & innovative products, Sir John was able to create a limited-edition collection to celebrate the new film, in theaters July 19, 2019, when director Jon Favreau brings the iconic characters to life in a whole new way. 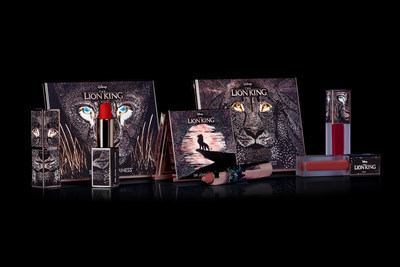 The collaboration has created a one-of-a-kind makeup collection featuring highly pigmented formulas with colors curated from the African landscape to create equally stunning day and night looks, handpicked by Sir John. From the innovators at Luminess Cosmetics, the rich formulas come together in hand-designed layered packaging, inspired by the iconic scenes and characters from the film. The quality of the makeup cannot be overstated, with all new formulations, deep pan powders, finely-milled eyeshadows and long wear lip products.

The inspiration behind these products comes from the story line itself: a young lion prince living in the flourishing African Pride Lands and his journey to adult-hood. The passionate tale of perseverance has still permeated society 25 years after the original film was released. Colorful moments in the movie have been reimagined in the collection, such as the rich fruit color Rafiki anoints Simba matches the Be Prepared Liquid Lipstick “Romantic Atmosphere.” The rich neutrals in the “Can’t Wait to Be Queen” Eyeshadow Palette mimics the rich clays found in Africa. The unmistakable sunset orange/red color from the iconic movie poster can be found in the striking Be Brave Matte Lipstick “Lion’s Mane.”

Together, Sir John & Luminess Cosmetics have worked closely to artistically capture the essence of the film’s characters in its modern-day cosmetic collection.

I was given the chance to review one of The Lion King Limited Edition Cosmetic Collections gorgeous Be Prepared Liquid Lipstick. I chose the beautiful shade, called “Trouble.”

Look at the pretty box it comes in!

I love the design! 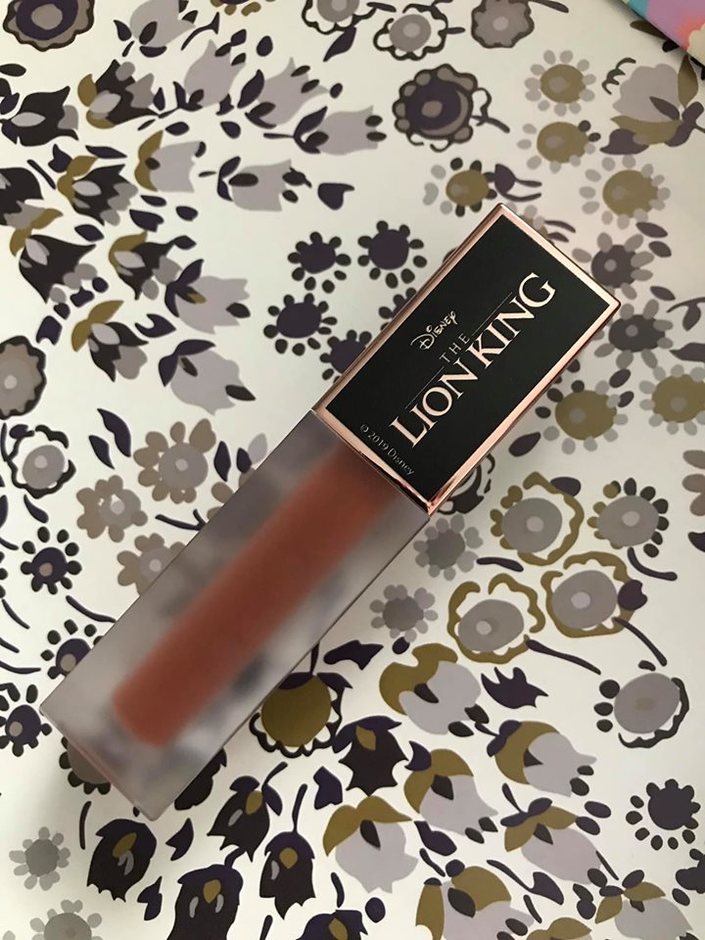 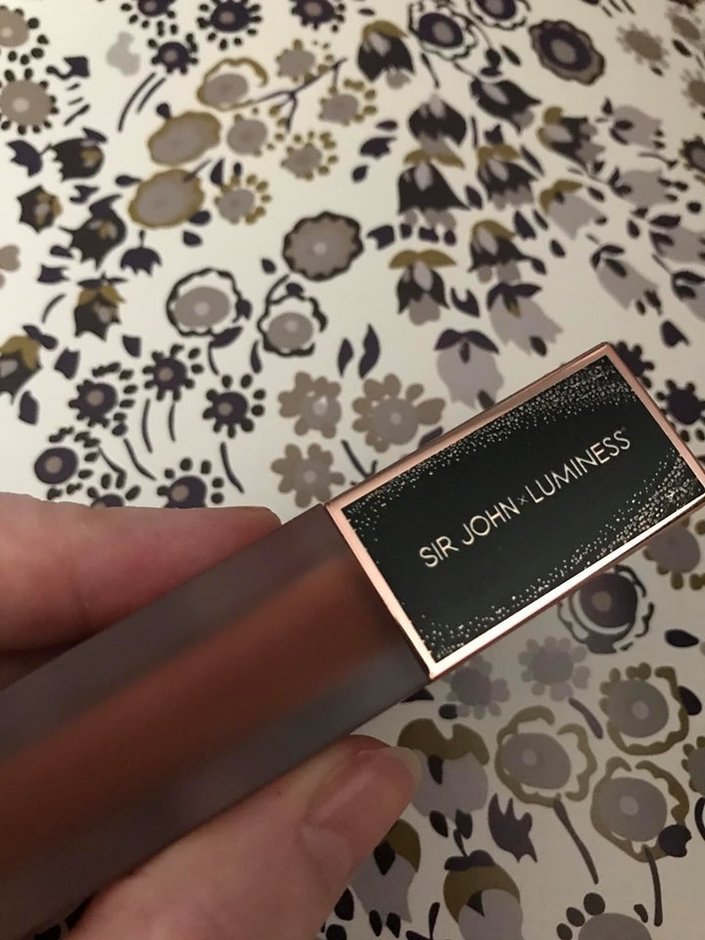 Here is what the shade ‘Trouble’ looks like on me 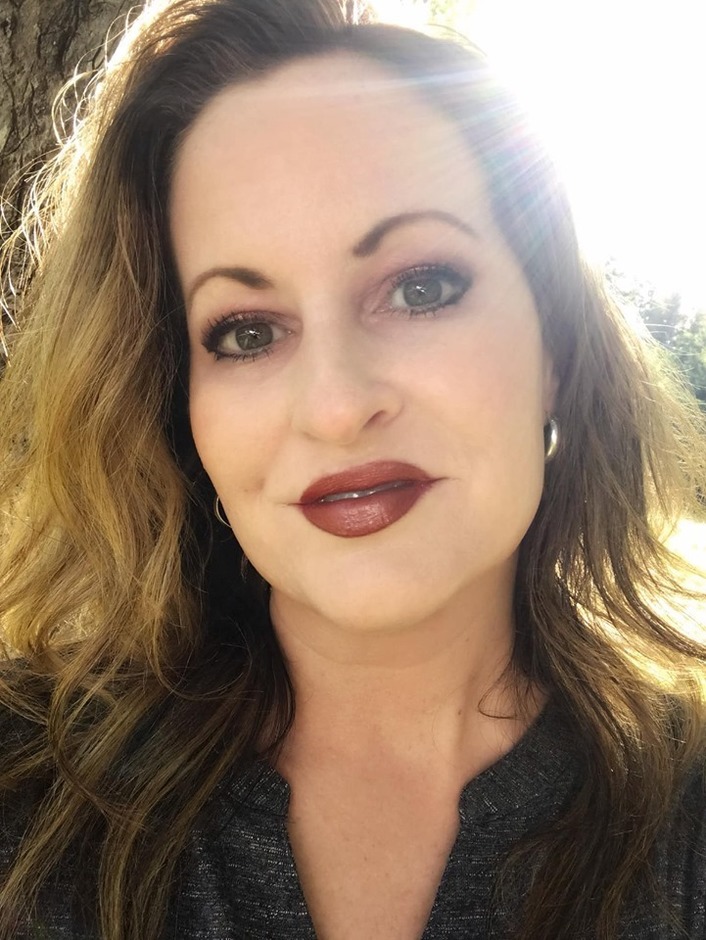 I love this liquid lipstick because it is highly pigmented and has beautiful, rich color. It is a long wearing formula that stays true for hours, and does not feather into any lip creases. Trouble is the perfect shade for me!

ABOUT THE LION KING FILM:

Disney’s “The Lion King, directed by Jon Favreau, journeys to the African savanna where a future king is born. Simba idolizes his father, King Mufasa, and takes to heart his own royal destiny. But not everyone in the kingdom celebrates the new cub’s arrival. Scar, Mufasa’s brother—and former heir to the throne—has plans of his own. The battle for Pride Rock is ravaged with betrayal, tragedy and drama, ultimately resulting in Simba’s exile. With help from a curious pair of newfound friends, Simba will have to figure out how to grow up and take back what is rightfully his. The all-star cast includes Donald Glover as Simba, Beyoncé Knowles-Carter as Nala, James Earl Jones as Mufasa, Chiwetel Ejiofor as Scar, Seth Rogen as Pumbaa and Billy Eichner as Timon. Utilizing pioneering filmmaking techniques to bring treasured characters to life in a whole new way, Disney’s “The Lion King” roars into theaters on July 19, 2019.

Nearly 25 years ago, Luminess Cosmetics began on a mission to provide beauty solutions to the beauty enthusiast not compromised by the constraints of the traditional beauty market. Founded by current CEO, Sean Mehta, Luminess was created as a professional quality Airbrush Cosmetics line that was designed to be easy-to-use for the at home consumer. Today, Luminess Cosmetics celebrates over five million airbrush units sold and its fifth-generation airbrush system which is the smallest, lightest, and most precise system available on the market. With new innovations in lip, and eye cosmetic products and formulations along with breakthrough skincare products, Luminess Cosmetics is now a full-service beauty brand.

World-renowned makeup artist Sir John is a consummate visionary who reveals and transforms, inspired by the essence of his clients’ natural beauty. Sir John uses the power of cosmetics to exalt women to their highest impact. While working during Fashion Weeks in New York, Milan and Paris, he quickly built his reputation for creative use of color. Sir John has had the privilege to work with some of the most sought-after fashion and beauty industry professionals from Mario Testino to Steven Meisel to Naomi Campbell. In fact, it was at Tom Ford’s first womenswear show in 2010 where he was introduced to Beyoncé, and granted the opportunity to work with her. Shortly after, Sir John began working with Queen Bey on everything from album art to music videos, concert tours, superbowls and a history-making September Vogue cover in 2018.